1837 Engravings of Maypoles and May-Day Celebrations

- April 29, 2008
The Every-day Book and Table Book, or Everlasting Calendar of Popular Amusements, from 1837, has a wonderful series of engravings illustrating a wide variety of Maypoles from England, Scotland, and France. It's remarkable to see the variation from the familiar plain pole with ribbon streamers.

The Northampton May Garland with its Empire-waisted May dolly is well suitable for our own New England Mayday in Northampton and Amherst in the Pioneer Valley of Massachusetts. In the early days of Banbury Cross Morris in Boston, I held a workshop on May Eve with the children's team to make a similar May dolly, which has become a tradition for the team on May morning on the banks of the Charles River in Cambridge. 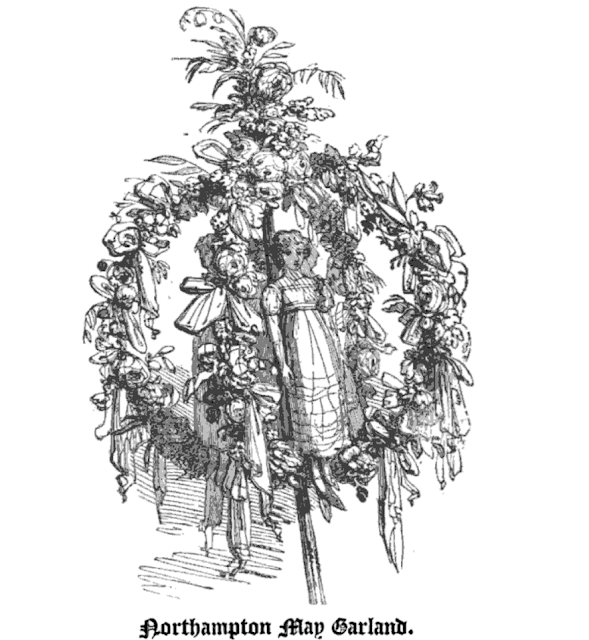 Kerchiefs flying, smart in their Scotch bonnets and tartan, the May-dew dancers at Arthur's Seat in Edinburgh cavort in drunken Scots abandon around a Scandinavian-style Maypole with a horizontal wreath adorned with branching boughs at head-height. Their bagpiper's "strathspeys and reels put life and metal in their heels." Several of our party climbed Arthur's Seat in February on our 2005 trip to Edinburgh, and it's delightful to imagine May morning on that wild and magical mountain on the outskirts of the city. 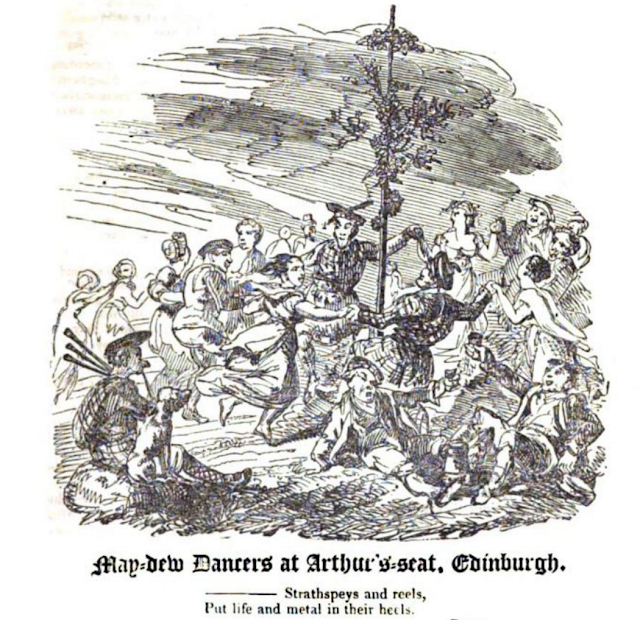 The most unusual maypole is "the Last Chimney-Sweeper, made of a "Scandiscope." This jointed whalebone machine used by chimney-sweeps who worked it up and down the chimney joint by joint as an alternative to sending a "climbing boy" up into the filthy flue. By 1826, the sweeps' guild gave their apprentices a dinner on May Eve to stop the practice of collecting money in the streets "by the worst class of persons, or for the sinister purposes of their employers." Leaping around their mechanical master with his carven face and wild brush of hair, the sweeps' antics remind me of the devil-may-care border team of the western Massachusetts hill towns, Green River Tap and Die. 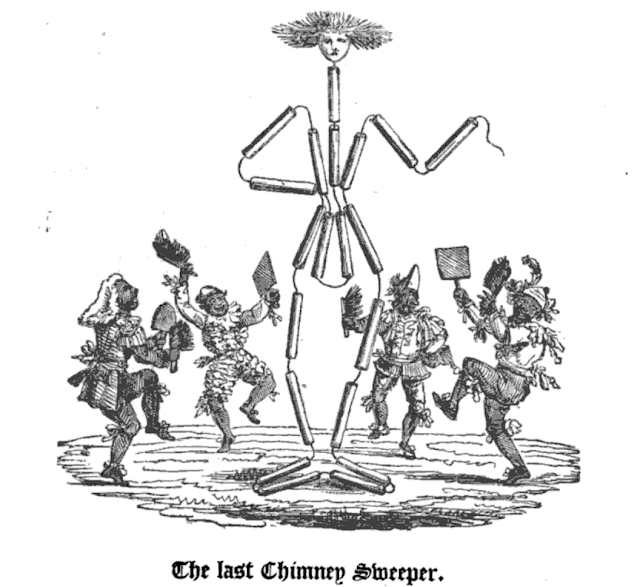 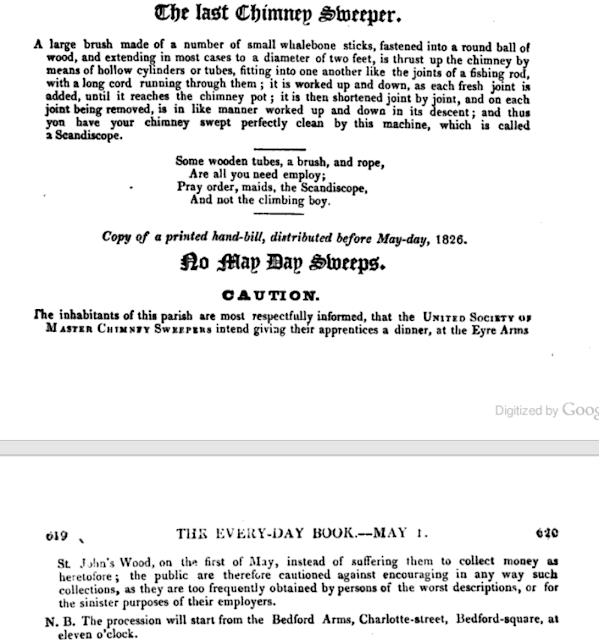 The Necton Guild Maypole almost mimics a Christmas tree, with its concentric rings of wreaths from top to bottom. Its fenced mound with a ring of performing dancers is the centerpiece of a Mayfair attended by peasants and gentry alike. It's easy to imagine this pennanted Maypole at King Richard's Faire on the South Shore, or at the Minnesota Renaissance Faire. 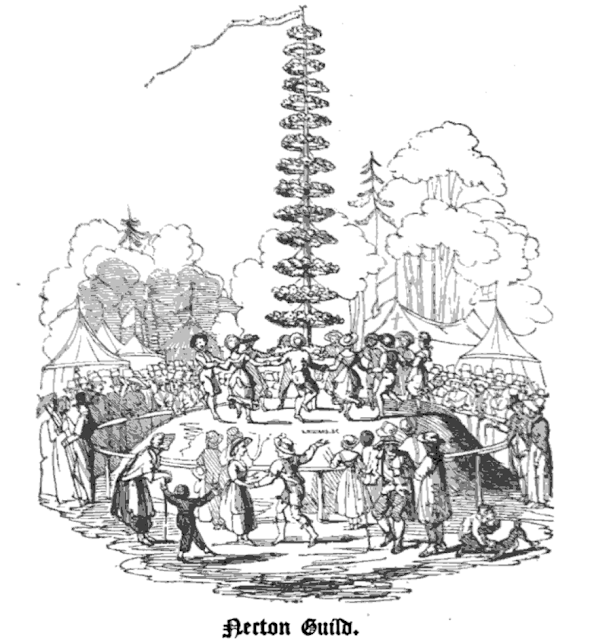 A vertical twist on the Scandinavian Maypole is this well-dressed Country Maypole with its ring of dancers. Apparently a permanent pole installed in the village well, it is garlanded with pairs of wreaths opposed like leaves on the lower half only. Perhaps this village did not have a ladder! 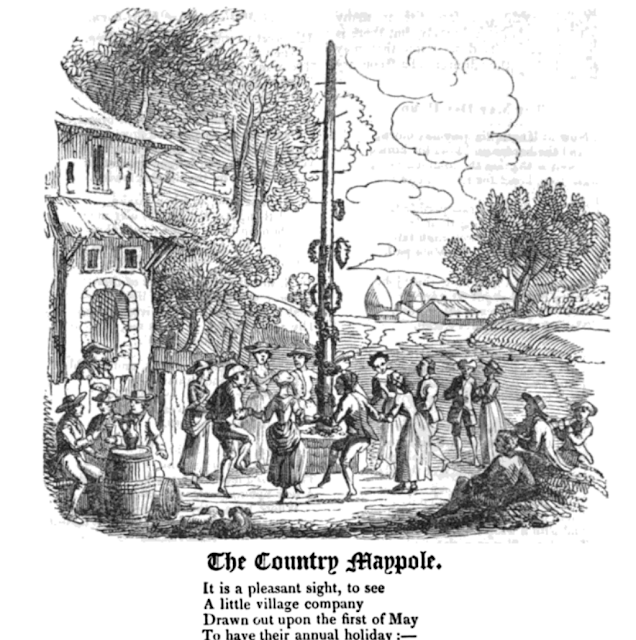 These French villagers are making a Herculean effort to celebrate Mayday by planting a living tree, upper branches intact and garlanded with ribbons, which they clearly hope will grow in its new location. "Let us profit, children of these lovely days, by this verdant visitor. We feel an intense joy in it, and it must soon stay the course." Guns and drums are at the ready to make a joyful din once the tree stands erect and free of its ropes and props. 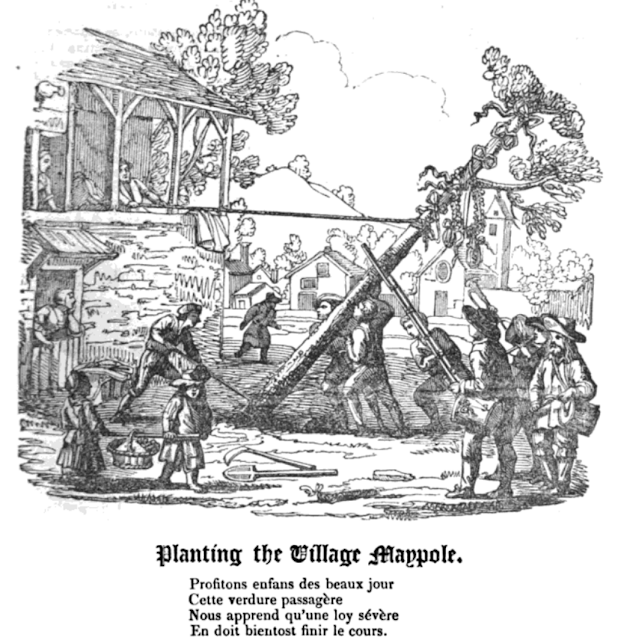 It's marvelous to see these variations on a tradition that's still vibrant in Old and New England two centuries later. Perhaps some teams may be inspired to revive one of these unusual Maypoles!


The every-day book and table-book; or, Everlasting calendar of popular amusements By William Hone:
Calendar Customs: Mayday and Spring