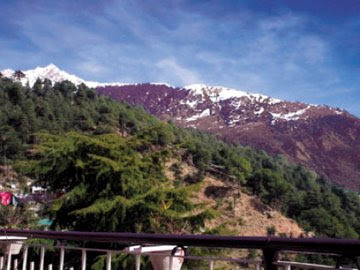 at right: the view from Ed's balcony in Dharamsala, India, 2004


Who can encompass the dreadful shock of sudden death? This is not the memorial page for Ed Softky, and you can read this for the black story of his passing and of his many tributes. This is about Light.

For those of you who knew Ed only through his Buddhist work, let me introduce myself as an old friend, singing and dancing buddy, and housemate of Ed's since, oh, maybe 1990? I don't recall. With Liz Lewis and Alan Field, we sang together in the quartet Lingua Franca, "Music as the Common Tongue." Here is the group's demo album, a truly limited release that maybe we should reprint in Ed's memory.

I was to see Ed this weekend (Columbus Day), for one of our joyously serious sessions of "PhilosoTea" and a visit to his new home in Brattleboro. As I was packing, I got a phone call from a mutual friend. "I've just heard someone say Ed was killed in a car accident. I know you'd know. Is it true?"

I didn't know, but I had a terrible feeling. I hadn't been able to reach Ed all day to plan where we should meet. I called his brother Bill in California. His voice on the phone told me the awful truth, but I had to ask. "Bill. I've heard something so terrible. Tell me it isn't true." "I can't tell you that." And the world went dark. I couldn't breathe.

While Ed's physical presence still lingers so powerfully in our hearts and minds, I wanted to offer one more chance to hear his rich, sustaining voice in song. Please listen to Light.

"Light" is Ed's translation of a Buddhist prayer, set to an American Sacred Harp melody. Ed loved the Sacred Harp, which held a high place in his passion for harmony, in song and in living. This was the first time Ed had answered the call to translate Dharma in music, part and parcel of his passion for bringing the voice of dharma to the West.

As a computer geek trained in science, Ed came to natural language later in his journey. We joked that he found it easier to translate Tibetan into Perl than into English. I was privileged to offer him a home base during the three years that he studied Tibetan in Dharamsala: a deeply intentional transition that transformed his outer life. His intention was so powerful that Ed's mere presence enlightened my cat Yoda into a Buddhist, so that he will no longer kill mice. Yoda now meditates serenely on mice and mouseness in the messy room that Ed once filled with prayer flags, incense, and inner space.

During our long sessions of PhilosoTea, we devoted hours to reflections on language, music, spirituality, patterns and structure, and the ineffable that defies translation. We had both discovered that translation demands more than grammar and syntax: it requires not only deep immersion in cultural context, but the ability to find your way back to the surface of your own culture. Then it demand of you the skill in your native language to tell of where you have been.

"Light" became a meditation for us, over many months of conversation punctuated by absence. Ed brought his work to me, humbly seeking my teaching as a writer and musician, and I in turn sought teaching from him in compassion, and some comprehension of dharma. Ed would unpack each Tibetan word like a flower opening, newly aware of his own limits as an English speaker. I would grope for English words that fit the shape of the tune, and Ed would discard them as lacking the right connotation, or seize upon one with fierce joy and demand that I unpack its English meaning in my turn. We would deconstruct the Tibetan rhyme scheme and meter, seeking not just a parallel phrasing, but to extract and articulate the differences that defied translation. Ed's vision was not simply to translate Tibetan into English, but to shape and express their vastly different sensibilities by holding the gulf of space between them, words and music holding that space like two empty hands apart. Once we had a phrase, Ed would turn it over and over for months like a string of prayer beads, bringing a new verse back from India to begin again.

He was endlessly fascinated, not only by words, but by the rhythm and shape they give to tunes. In teaching me to sing "Light," he insisted that I learn the Tibetan not just word for word, but vowel by vowel, consonant by consonant, with intonation and breath in deep mindfulness, striving for the most literal and uttermost consonance with his inner understanding of the prayer. In singing, I would feel I was stumbling in the dark, and then suddenly our voices would lock in a moment of harmony and Ed would cry, YES! With what joy and radiance he showed me how the foursquare solid form of the Sacred Harp was transformed by the Tibetan phrasing into a lilting, dancing shape entirely unWestern, and yet composed of the same literal notes. He was incredibly, eagerly, joyfully demanding, and it became an extraordinary experience in songmaking.

With anyone else, even I might have gotten bored with poring over two verses for three years. But Light was Ed's calling in so many ways, and he envisioned this piece as the beginning of a series of sacred hymns for Western Buddhists. Typically of Ed, he never felt it was finished enough to publish, though he had given me a harmony and hoped to record it with me, and perhaps with others.

Music may be the voice of soul and of spirit, but it is also sadly true that the human voice is the most mortal of instruments. Ed's death is as shocking as if someone ran over a Stradivarius in the street. More so, because a violin takes its life from the fiddler. With utter commitment of his intensely physical being, Ed made of himself an instrument of Light.

In the first numbing shock of grief, the silencing of that voice stopped all music in my soul.

But then, silence has always been one of Ed's greatest gifts. Only in silence can we truly listen, and truly hear. Ed taught me to hear light.

I trust that Peter and Mary Alice Amidon, Mary Cay Brass, and others will share with me the solemn joy of spreading this small flame of Light that Ed has left for us. I look forward to singing it with you.
World Music

Wendy said…
Thank you for your beautiful words and thoughts about dear, wonderful, amazing Ed.
12:36 AM

Unknown said…
The range of Ed: as wide and sparkling as his smile, a wholehearted octave beyond what we ever imagined! Thanks so much--your site is being shared among Ed's friends in Brattleboro, where he is dear among so many groups--Buddhist practitioners, musicians, wilderness folk, potluck gatherings, and folk he touched by merely walking into Mocha Joe's in the a.m.
11:35 AM

Pioneer Valley Brain Injury Support Group said…
I just felt it so important to share this youtube video: http://www.youtube.com/watch?v=X1qgmyXAsIo with Ed's community - I was in Deerfield that day and only met him them, and before we began dancing I remember his thought about bringing peace to the world through basketball (?) and I remember trying to think how we could do this - it comes back to me sometimes, anyone know about Ed and basketball? My heart to you all ~ Anne Flaherty acflaherty@yahoo.com
12:17 PM