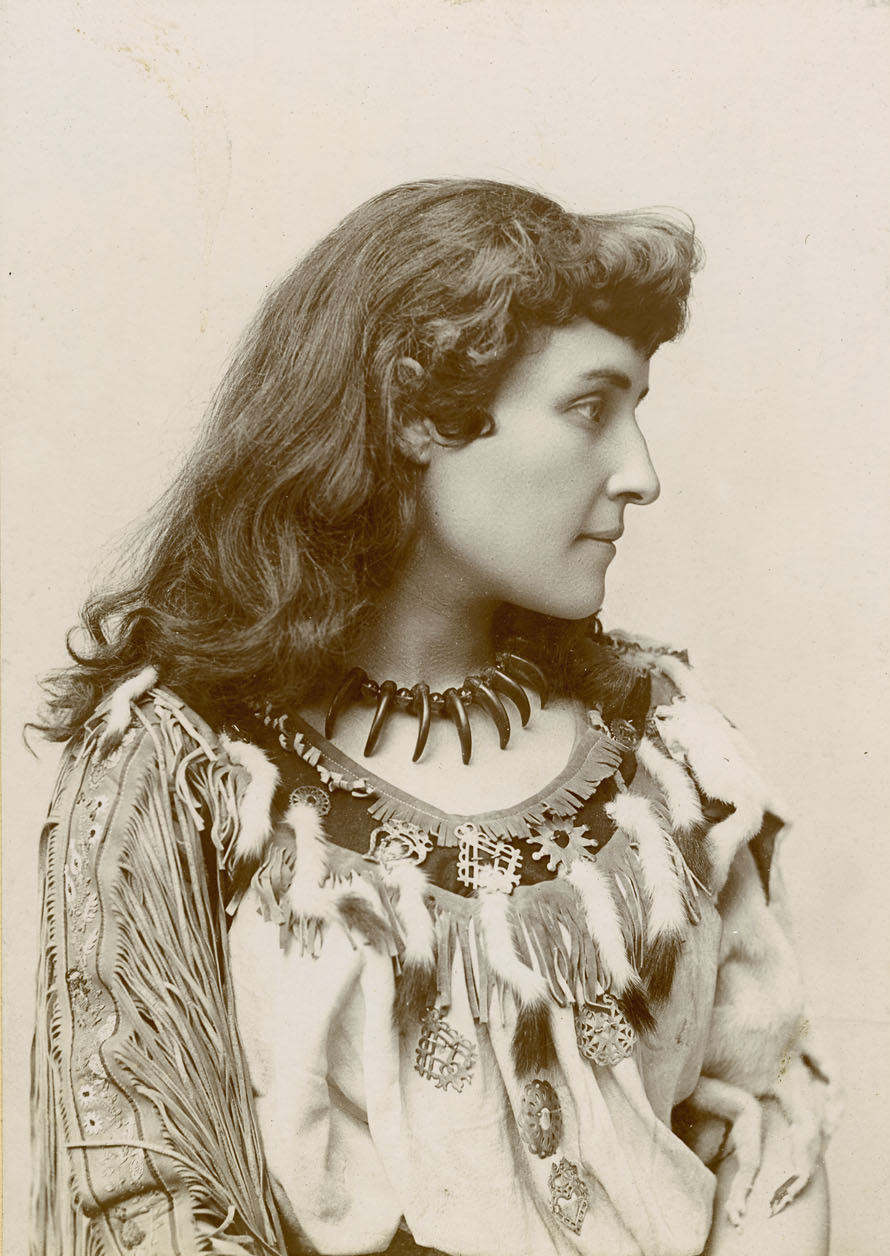 The stage career of Emily Pauline Johnson, or Tehakionwake, illustrates that at least some prominent native women participated actively in the "Indian Princess" image presented in Lee-Li-Nau, and made good money at it. In the 1890s, Tehakionwake toured Europe in buckskins and beads, entirely intentionally. For the second act, she'd come out in a ball gown and recite Shakespeare, as befitted her multicultural heritage.

"Throughout the 1880s Johnson established herself as a Canadian writer and cultivated an audience amongst those who read her poetry [which] signaled her membership amongst Canada’s important authors (Strong-Boag and Gerson 2000, p. 101). In her early literary works, Johnson drew lightly from her Mohawk heritage, and instead lyricized Canadian life, landscapes, and love in a post-Romantic mode reflective of the literary interests she shared with her mother (Strong-Boag and Gerson 2000, p. 101).

In 1892, Johnson recited her poem “A Cry from an Indian Wife,” a work based on the battle of Cut Knife Creek during the Riel Rebellion, at a Canadian Authors Evening arranged by the Young Men’s Liberal Club. The success of this performance initiated Johnson’s 15 year stage career and encouraged perceptions of her as a girl (although she was 31 at the time of this performance), a beauty, and an exotic Aboriginal elocutionist (Strong-Boag and Gerson 2000, p. 102).

After her first recital season, Johnson decided to emphasize the Native aspects of her literature and performance by assembling and donning a feminine Native costume (Strong-Boag and Gerson 2000, p. 9-10). Johnson’s decision to develop this stage persona, and the popularity it inspired, indicates that the audiences she encountered in Canada, England, and the United States — like the large crowds who attended shows such as Buffalo Bill Cody’s Wild West Show and ethnological Aboriginal exhibits in the 1890s — were educated to recognize representations of Native peoples on stage and were entertained by such productions (Strong-Boag and Gerson 2000, p. 111)."

During my traveling years reenacting the living history of the fur trade, I became fascinated with Pauline Johnson, visited many of her landscapes from Ontario to British Columbia, and set two of her poems to music: Songs My Paddle Sings and Toast to Vancouver. Her work places Tehakionwake among North America's greatest poets of any ethnicity, and she embraced her heritage within the cultural context of her era.

Today's readers encountering the romanticized stage version of the "Indian Princess" may well wince at reading that "A chorus of Indian girls is one of the novelties of the opera, affording color and action in no small degree" to Lee-Li-Nau. These stereotypes may well be painful to modern readers. But Pauline Johnson was a successful author on stage as well as in print, and a chorus of English, Italian, or Japanese girls afforded similar novelty, color and action to Gilbert and Sullivan in equal degree.