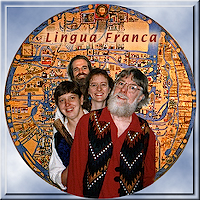 From 1999-2001, I sang with a wonderful quartet of like-minded musicians who loved close harmony and travel as much as I did. The only problem with a world music group, of course, is that they all go off to see the world, and so we parted ways as a quartet, contenting ourselves with the occasional harmonic convergence at a folk festival or a party.

Lingua Franca was founded by Liz Lewis and Ed Softky, who performed with Alan Field as the a cappella trio Lewis, Softky & Field. Lynn Noel became the "fourth volume of the trilogy" in January 1999. Lingua Franca were featured in the Folk Song Society of Greater Boston's May 2000 production of "Bound For Glory: The Words and Music of Woody Guthrie." The quartet performed at NEFFA, NOMAD, local festivals, senior centers, and anywhere else they received the slightest encouragement to sing.

Lingua Franca is not currently performing as a quartet. Liz Lewis sings with the women's a cappella sextet Constellations.…
Post a Comment
Read more
More posts