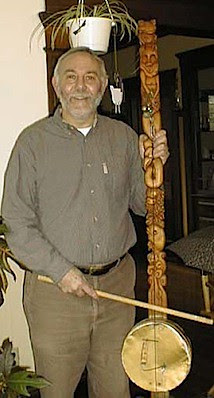 When you play in a band with a pogocello, who can resist a washtub bass? The photo at left is Gloucester Hornpipe and Clog Society founder David Rosen with the inimitable pogocello. On the right is the newest member of the band, a handmade washtub bass from Athens, Georgia: bought on eBay and shipped to Boston on Greyhound.Who buys a string bass on eBay? Well, not intentionally. I was browsing to find out whether anyone should spend the several hundred dollar estimate I'd heard for repairing the cracked upright bass of our late friend Dave Stryker. Not that I really wanted Dave's bass, which is a full-size monster larger than my car. But we wondered what it was worth, for donating to a school or selling to some local musician as-is. So, go to eBay and plug in "upright bass" and "< $500."

You don't find much in that price range. But what is THIS? A washtub crossed with a banjo? I read on. "Handmade washtub bass. Full 3/4 size fingerboard of black walnut, maple face. Piezo pickup. Impervious to heat and cold. Fits in the front seat of a Prius. Local delivery to Athens area only."

I was enthralled. I visited the page for days, telling myself not to be ridiculous. But--I am a Fool, after all. And truly, the idea of bringing this unique item to our eclectic and eccentric band was irresistible. So, the crazy lady from Boston wrote to Athens and asked, "How much to ship?"

Mr. Pat Lyons of Georgia's Magpie Paddy ("Traditional Irish Music for the Deep South") was bemused, but eager to help once he realized I was serious (and prepared to pay a shipping cost close to his asking price for the bass itself). By way of explanation, I sent him our website photo, complete with pogocello. According to Pat, his wife looked over his shoulder at us on the screen and exclaimed, "They look like people we already know!" Indeed. I knew that from looking at this bass. It just had to be. This wasn't a sale. It was a North-South cultural exchange, Irish band to Irish band.

And so, the deal was struck, the auction bid, the instrument crated, and a cross-the-Mason-Dixon-Line bus ticket bought for what has to be one of the larger packages to go Greyhound. (I had visions all week of Georgia Paddy riding North in a bus seat with a backwards feed cap on his peghead, staring out the window and wondering what the Yankee Irish gal from Boston was going to ask him to play...)

Once arrived, Mr. Paddy Washtub's evident personality, humor, and dignity earned him his name the moment he emerged from his crate. And yes, he sounds like a "real" string bass, with a remarkably clear, warm, accurate tone both acoustic and amplified. The band is amused and mostly delighted, and we're finding all sorts of use for him once we get used to his taking up the space of a seventh member onstage.

And no, I don't--or didn't--actually PLAY bass. But for such a splendid creation, I had to learn. After all, it's just the bottom four of the guitar, which I do (or did) play, so I'm gettin' along. Bandmate Jonathan Gilbert also plays, and has outfitted Mr. Paddy's fingerboard for me with a set of sailors' stripes, Suzuki-fashion, for those of us who still need to fret. And fortunately, open strings lend themselves well to our band motto: "Play D Until Something Happens." So I plunk along happily on the downbeat, alarming our guitarist (who's used to being the bottom of the band) and apparently entertaining the audience no end.

Paddy's been the talk of the town at our "St. Patrick's Month" concerts, finding his niche from Murphy's & Ryan's Polkae and Drowsy Maggie to the Flop-Eared Mule and the Jamaica Plain Rag. He was a huge hit on St. Patrick's Day at Honey Fitz Pub in Malden, where he got the chance to be played by a REAL bass player from our friends The Kellsmen. And this summer, he may get a boat ride out to Georges Island to play for sea chanteys at our annual Fourth of July with Boston Harborfest. Meanwhile, I plan to teach Mr. Paddy some work songs and gospel at a few hallway jams at NEFFA--and I do mean JAMS, if I know what a bass can do.

Just goes to show: eBay can change your life! You just never know what you can do until you try.

Anonymous said…
This comment has been removed by a blog administrator.
4:23 AM

pat lyons said…
Hey Lynn,
I'm glad the bass has served you well. I'm still making them if anyone wants one, although yours was my first and holds a special place
Pat Lyons
7:56 PM