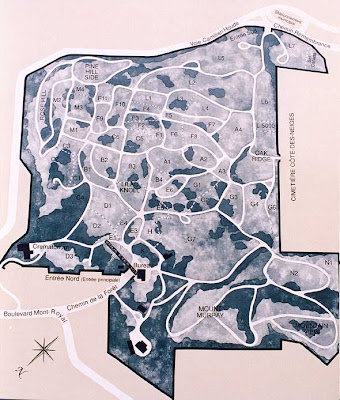 Yesterday we found Lisette’s grave. Helen Meredith had wanted to help me look from the beginning, and having a Montreal native along really smoothed the way. I had written to Mount Royal Cemetery before and gotten a location number, G-11, which as it turned out wasn’t much help. We went in to the office and asked for Elizabeth Harmon d. 1862 and Abby Maria Harmon d. 1904, and the woman at the desk went in the back and came back in five minutes with a Xerox of two index cards. Yes, she was there, all right, and so were Mary and Calvin and their son Andy and a few others as well. Calvin Ladd had purchased the plot, but didn’t appear to be buried there. She gave us a plot map of that section of the cemetery, marking it on the main map. So off we went to G-1, Lot number 11.

Helen had done this before with her friend Jill’s relatives, so she knew how hard it was going to be. And we walked all around the edges of the section, which joins G-2 with just a dotted line between them. We parked at the top of a long grassy strip and hunted for about 45 minutes with no success. I was sure by now that either the family had died too poor for a stone or that there was a flat marker that had been grassed over. Poor Lisette, buried in an unmarked grave.

I went back to the car to check the order people had been buried. The first was a little girl, aged 4, in 1854. Was this why Calvin had bought the plot? She would probably only have a tiny marker. Next was Mary, Calvin’s beloved wife, in September of 1861. Surely she would have a gravestone? He was a well-to-do blacksmith, and had had enough money and connections to petition the courts on Lisette’s behalf in the 1840s. Had he come down in the world in twenty years? Hardly, because his son was listed in the 1870s as buried here, “brought from New York.” If they had had money to transport a body, surely there would be a marker. And the last one in 1904, Abby Maria, her daughter a suicide by drowning? We could hardly expect much of a marker for her, even though I knew she’d been brought here from Hull for burial. Someone must have cared, but how much? We weren’t finding them. I lined up the north arrows on the two maps for about the fourth time and tried to see where we could be going wrong. Helen was by now convinced we were in the wrong section and was methodically quartering the neighboring areas.

“Let’s go back to the office before they close and get the names of the other plots around her,” I said. “At least that way we can narrow it down.” So back we tooled to the office, where she obligingly gave us the family names of every plot surrounding the Harmons/Ladds. This time we took a different route, and were certain we had found G-1. I determined to walk all the way around the section, looking for any name we’d now got. Helen worked across the road, finding some Hollands (one of the names we’d got) but not any other neighbors. Probably not the right Hollands, we agreed, and moved on.

The edges of the G-1 section were clearly mapped out, and it didn’t match the line of the road on the main map. Could the roads have changed? I found myself at the top of the grassy ride we’d parked at earlier. Was this a “road” on the map? It certainly fit the shape of the section better than the asphalt one. I decided to walk down its edge to hunt for names. Here was the convex, then the concave curve: and right where it was supposed to be was a large, sarcophagus-style monument sporting a turbaned wasp’s nest and the name Holland. There were Hollands to the right of the Harmon plot, all right. I looked to the left.

And glory be, there she was. “Yeeeeee-HOUP!” My whoop of triumph would have done justice to a canoe arrival, but probably shocked the cemetery. I was standing in front of a polished red granite marker “in memorial to Daniel Williams Harmon, died at Sault-au-Recollet, Que, ##, 1843, to his wife, Elizabeth Laval, ##, and to their daughter Abby Maria, d. ## 1904.”